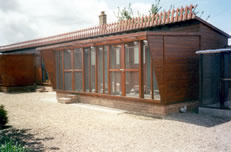 On a beautiful late October day I set off with my friend Roger Owers known to all his friends as Dappy to Exeter, to visit a quite unique stud of long distance racing pigeons based on one of the best long distance strains ever, the Jan Aardens. The fancier concerned is Steve Wright supported by his lovely wife Lesley. They are very much a partnership Steves duties are the pigeons and the lofts and Lesley deals with all the paperwork, pedigrees etc, and she does all the advertisements and if any of you have seen their adverts you must agree she does an absolutely first class job.

It is very much a joint decision when they are buying in new stock for their small but very select stud. I have known Steve and Lesley for quite a few years, I first met Steve and Lesley at Paignton continental club dinner in 1990. At that time Steve was the top flyer in Paignton Continental Pigeon Club and lived at Dawlish on the south coast, where Lesley ran a bed and breakfast/guest house while Steve was a gentlemen’s hairdresser in Exeter, a business he ran for 35 years, recently retired. Through being an ultra successful pigeon fancier the local club put him in a section virtually on his own and the local fed changed his section with virtually the same result, he was unfortunately being forced out of the racing scene he loved by his fellow fanciers (where have I heard and seen this written before).

Despite numerous invites to visit them in Dawlish I never made it, but as my interest now is long distance racing in particular I decided to ring Steve one evening to see if I could make a long overdue visit. Steve readily agreed so the visit was arranged. After a couple of phone calls we arrived at Steve’s lofts in excellent time to be greeted by Steve. As you can quite understand that when Steve and Lesley moved to Exeter they were quite disillusioned with the racing scene and took the very bold step to set up a small stud which obviously called for quite a substantial investment in time and money and you can take my word for it they have made a quite superb job of it. Sooner or later I am sure Steve and Lesley will return to the racing scene, sooner rather then later I hope. We as a sport can’t allow top fanciers being forced out of the sport by their jealous competition, just as an example of just what a good fancier Steve was in his last few seasons racing in Dawlish he won 17 firsts from 22 races and the next year he won 19 firsts from 21 races and when he decided to pack up racing his Janssen family were all sold to PJ Lofts.

The lofts are L shaped all stained in red type timber treatment which makes everything very smart and tidy all the lofts have flights on the front all facing south and south east which means they get sun virtually all day. The day we were there it was a lovely sunny day and the loft environment was superb. The loft at the end of the garden has individual breeding pens for all the principal pigeons so parentage is guaranteed. All in all a lovely set up.

Steve cleans the lofts every day himself, no hired help here, as he says you have to have your finger on the pulse and by being with the pigeons 365 days a year you are not likely to miss anything. No type of deep litter is used just the trusty old scraper. Then we moved on to the best bit, looking and handling the long distance pigeons in particular the blue bloods. First we handled the Vlekje pigeons “Vlekje 080 an 839 the 270 and the 964 all direct from the mighty “vlekje” and superb specimens they were, they were lovely shallow pigeons with terrific muscles and fantastic feathering. Next the “De Barcelona 862” direct Son of “De Barcelona” again shallow lovely muscles and super feathering, next we moved on to the Jan Polder pigeons we handled “The President”, “Champion Bonte Beer” and “Sister Victoria” these pigeons just oozed class, again medium to small shallow lovely silky feathering. My particular favourite was “Bonte Beer”, 4 times over 600 miles, 6 times over 500 miles with a racing record to match. A quite superb cock. Although Dappy’s favourite was “Vlekje 964”, but it was like being a child in a sweetshop so many beautiful pigeons and the condition and bloom on these pigeons was a credit to an expert fancier and had to be seen to be believed.

The loft walls were white with bloom. Steve was telling us that he gets all his corn from his good friend and farmer Robert and mixes his own mixes, but on our visit the cocks were on 50% barley and the hens were on 75% barley. Steve is a great believer in natural immunity.

We had a lovely day out handling and looking at some fantastic birds, it is absolutely certain we shall be returning. Our thanks to Steve for showing us around and letting us handle these beautiful pigeons. Any queries or requests for further information feel free to ring me Mike Staddon 01460-76458.